I've moved! You can now find this blog at www.teachingthelittlepeople.com. Please bookmark this new site and come on over! 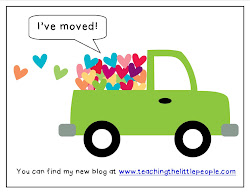 I've Up and Moved 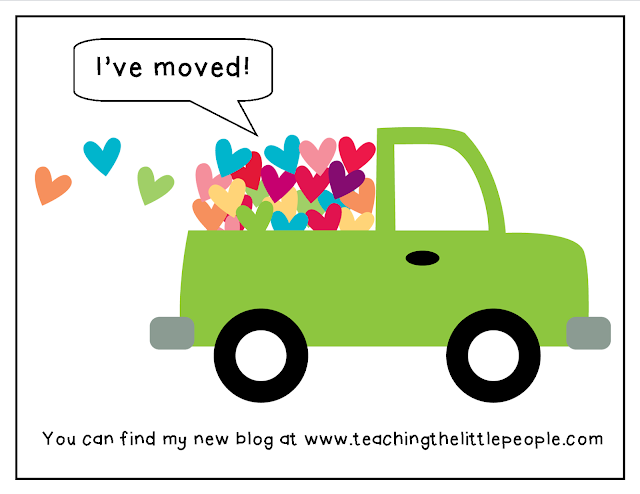 I have moved my blog to a new location.  You can now find it at www.teachingthelittlepeople.com.
Posted by Julie at 9:21 PM 14 comments:

Um, whatever happened to "This Spells Cat"?

Oh, the things those Little People say.  Today we have the letter bears out, and one Little Person pulled me over to them excitedly.  "Hey, look what I made" he said with pride.

He showed me this line of letters excitedly: 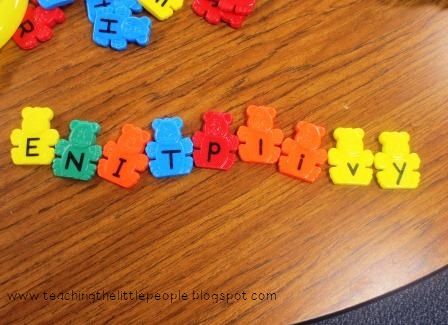 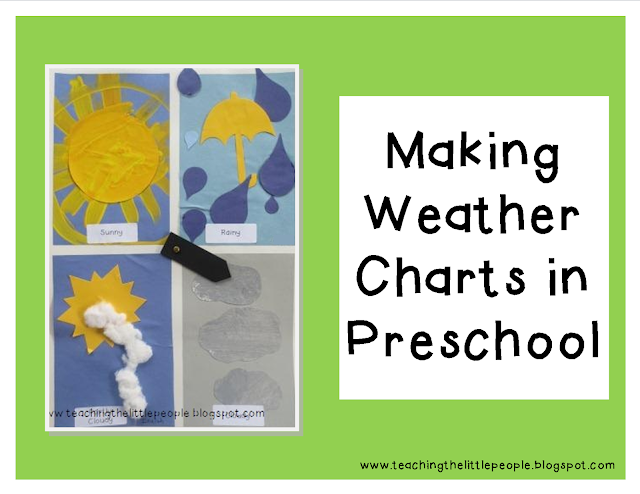 Last week our theme was Seasons and Weather.  Actually, it turned into more of a "Seasons and Weather" theme, because there was just a lot going on with that alone.   Plus, the last time I tried to talk about a season  I realized that nothing outside was reinforcing what I was saying to the Little People anyway.  So I decided to leave the Winter talk until it actually is acting like winter outside, and focused on the just the weather.  Because as we all know, no matter if it is exactly what we are expecting or not, we always have weather.

I decided before the week began to cover one different type of weather each day on Monday through Thursday, and then review on Friday.  And believe it or not, the weather outside was very cooperative.  On Monday we were focusing on sunny and it was sunny.  On Tuesday we did cloudy and it was cloudy.  Wednesday was Rain Day and amazingly - it was rainy.   Thursday was Partly Cloudy, and it was - well, it was just cloudy.  However, three out of four is not bad at all.

Our big project for the week was to make a weather chart, and so we made one section a day as we talked about the different types of weather.

On Monday we made our sunny pictures.  I put out die-cut suns and the Little People spooned paint on them. I then placed a piece of waxed paper on top and then they squished the paint all around, leaving suns that looked like this: 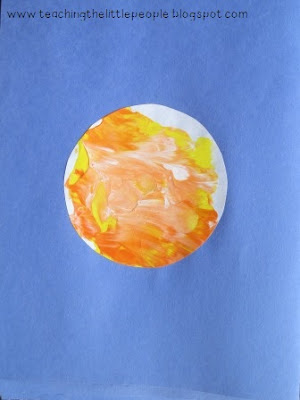 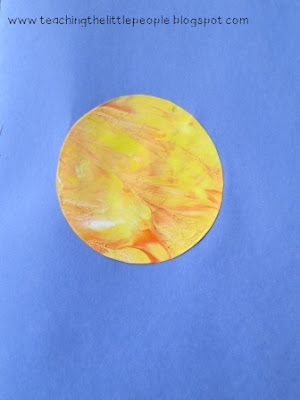 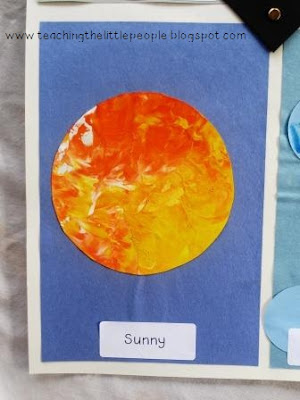 Later in the week the Little People added sun rays to them.  I must admit that I really had a hard time when some of them started repainting their suns and covering up their previous fantastic paint jobs, but I took a deep breath and let it go.

Tuesday was cloudy.  We made clouds by painting gray paint onto white paper with shower poofs.  Later I cut these papers into clouds (since the Little People aren't big into cutting yet). 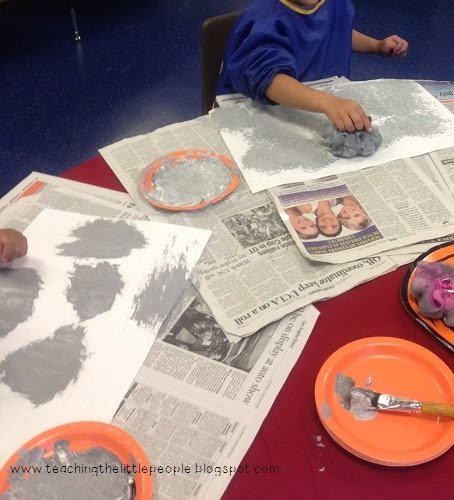 Wednesday was Rain Day, so we provided umbrellas, raindrops and markers and let them go to work: 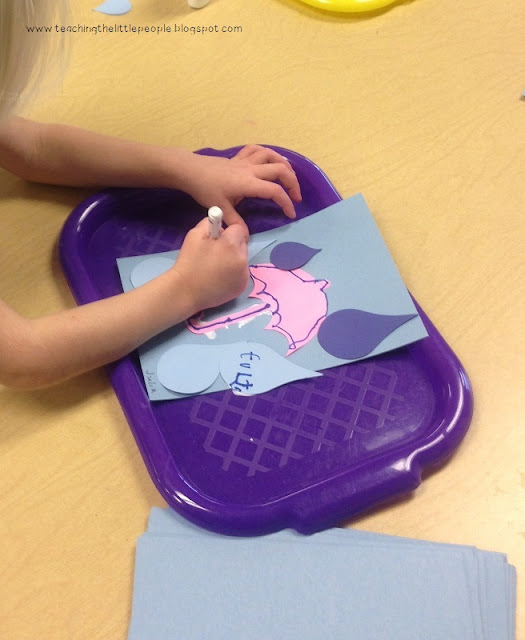 On Partly Cloudy Day the materials were die-cut suns, cotton balls, and lots of glue.  I find that I don't have a picture of those, except for on the finished products: 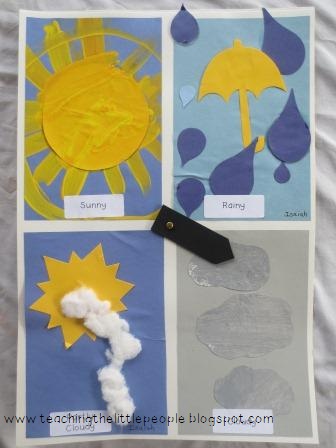 I decided to go with the printed labels for weather names because a)they look nice and b)I can save this computer file for next year.  Hurray for saving time!

The arrows are cut from fun foam.  I made the hole in the middle of the chart with an "everywhere hole punch" from my scrapbooking stash.

Even though these were a lot of work to finish up, I think they turned out wonderfully.  We used our sample pictures to make one for our classroom, so hopefully the kids will take the language they hear every day during weather time home and use it with their own chart.
Posted by Julie at 6:52 PM 1 comment:

A New Week In Preschool

It was a pretty good Monday in Preschool today, all things considered.  We had kind of a crazy week last week with all of the rain and inside-ness, but we were able to go outside today.  Everyone seemed to be in a fairly good and docile mood, which of course always helps things along.

One of my Little People did start their school day off to a little bit of a late start, due to his little brother having a "Terrible Two" episode.  It turns out that little Johnny picked up his 6-week old sister from where she was napping on the couch - and put her in the (thankfully unlit) fireplace.  So, while our day started off pretty well, it wasn't that way so much for little Johnny - and the baby, of course.

We largely went about our day normally, dawdling on our way to lunch and saying things on the playground  like, "No, I really don't think worms like going down the slide."

We're talking about the letter T and Teddy Bears, so we have all sort of fun things of bear things ahead of us.

In fact, here are a bunch of bears from our house, getting ready to travel to school tomorrow.  The bears live in a cabinet in our house that unfortunately smells a little old, so they always need a good airing and Febreze-ing when they emerge from their in-cabinet hibernation. 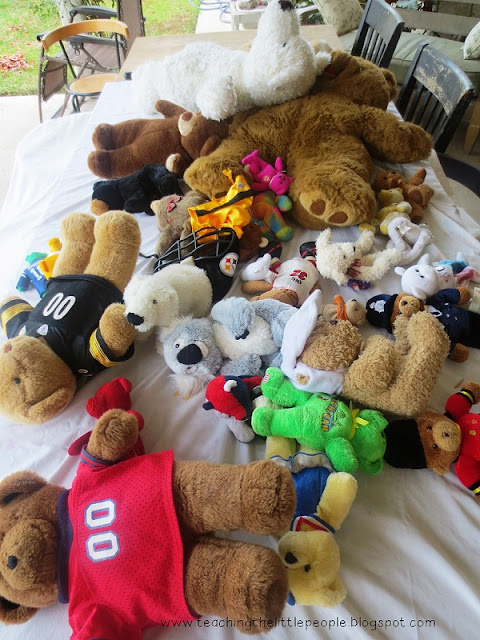 In general, I have high hopes for the week ahead.   As do the bears, who get to live in the sunshine - and fresh air for awhile.
Posted by Julie at 9:11 PM No comments:

Don't Throw Your Junk in My Backyard

As this week was the week we talked about the letter J, we did a lot of things with that letter.  One of the things that we did was to learn a new song:  "Don't Throw Your Junk in my Backyard" (because "junk" starts with J). While I  know that this song has been recorded by different people (including Greg and Steve), I first remember reading about it in this great book:

The song goes like this, to the tune of  "The Wheels on the Bus":

After we sang the song a few times and talked about the word "junk", I had everyone who wanted to come up with something that they wouldn't want in their backyard, and we sang it with their suggestions in it.

They all thought this was great, so today I wrote the song onto sentence strips and put it in a pocket chart.

(Unfortunately, I left a phrase out and also added a very strange period in there, but you get the idea:) 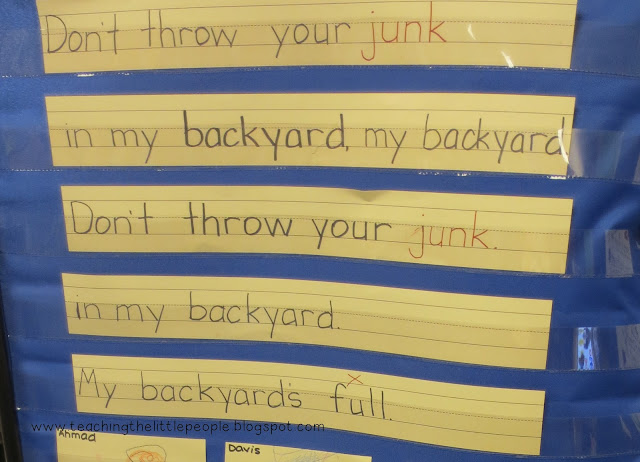 Then during Center time I invited the Little People to color a picture of something they didn't want in their backyard and told them that I would write the words for them.

We got a wide variety of things that we didn't want in our backyard: 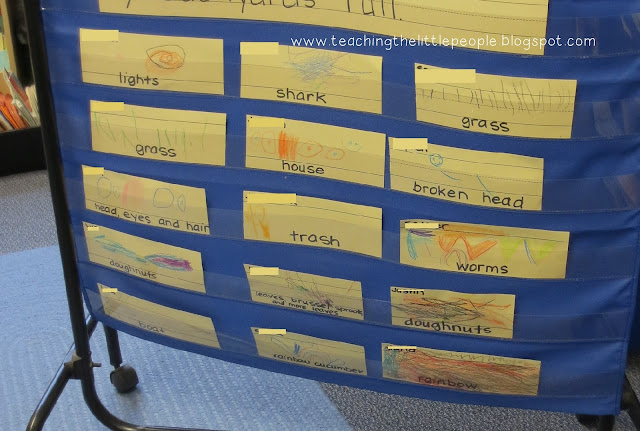 After centers, we got back together and  and sang the songs with everyone's suggestion in it.  (Even the verse that ended up as "Don't throw your dead dog in my backyard", because it's just that kind of silly song.) 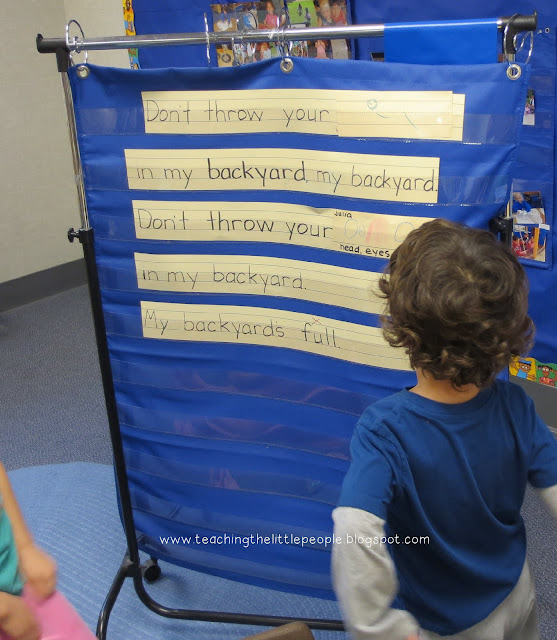 The Little People loved it, and I thought it was a great way to making language meaningful (and silly) for them.

I'll be interested to see if they want to draw and label more "junk" for this chart next week...
Posted by Julie at 8:24 PM No comments:

Over the Thanksgiving break I worked on putting together some of the Little People's memory book pages.  Every year we put together this book as an end-of-the-year gift, with one page dedicated to each month of the school year.  I wish I could say that I get done with each month's pages soon after that month is over, but it's not always the case.  However, I am doing better this year than normal - considering that I'm working on November pages before November is even over.

We try to make one hand print art project for each month.  This last month was handprint turkeys.  However, to enable the Little People to still be creative with their turkeys, I like to let them draw the eyes, beak and feet themselves.


I always think they're so charming when they're done: 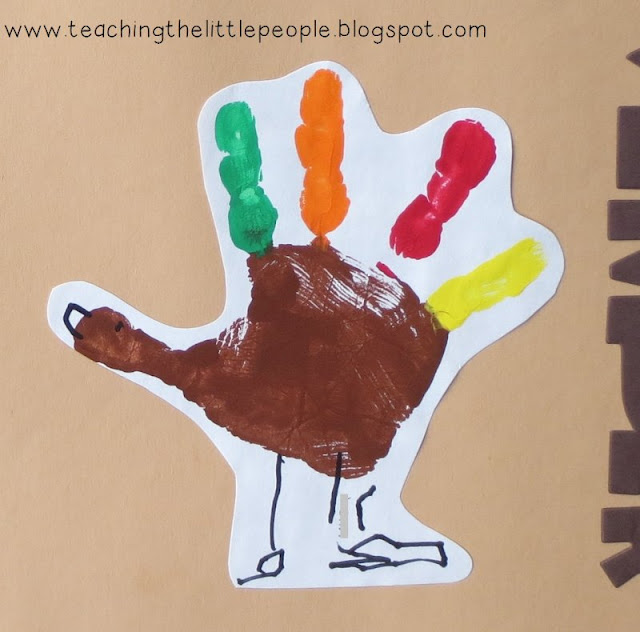 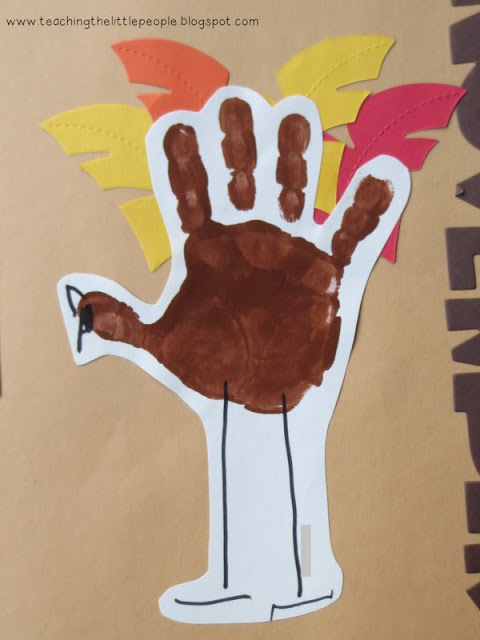 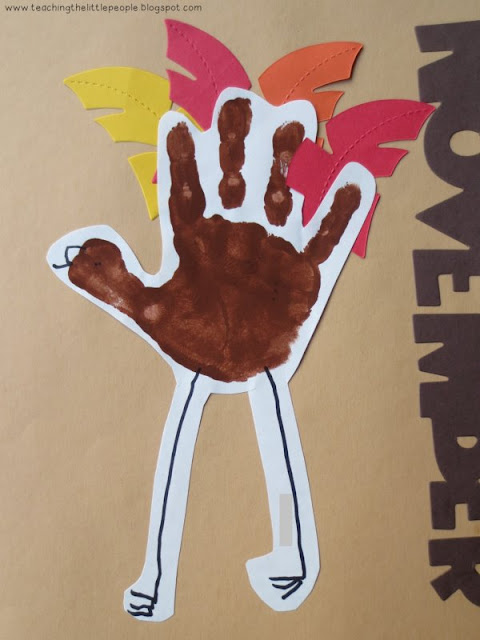 I like to think of them as hand print turkeys with a little extra personality.

Next week we're talking about "Seasons and Weather" with the Little People.   This is a unit that I usually do in January, but we ended up with an "extra" week between Thanksgiving and Fall, so in went Seasons and Weather.

When I first started teaching in California, I went about introducing winter to my students as I always had.  Which means cold, snow, snowmen, etc.  However, one day I began to worry that this was teaching the wrong idea to these California Little People, since it basically never snows here, and it's rarely really cold.  (My California friends beg to differ with me, but after years of living in really cold places, this weather is quite mild by comparison.)

However, I then learned that children living where I live experience snow by going "to to the snow" in the nearby mountains, where they frolic and play (the Eskimo way), and then they come back down to the flatland and go on about their business in their 60 degree winter.

After I learned this, I didn't worry about talking about snowy things, although we do spend a good amount of time talking about how winter really is here where we live.

All that to say that we will do this poem soon in our classroom.  Even if they rarely see snowmen, it's good to know that they still exist - and they melt in the sun.  It's almost like a science lesson for them: 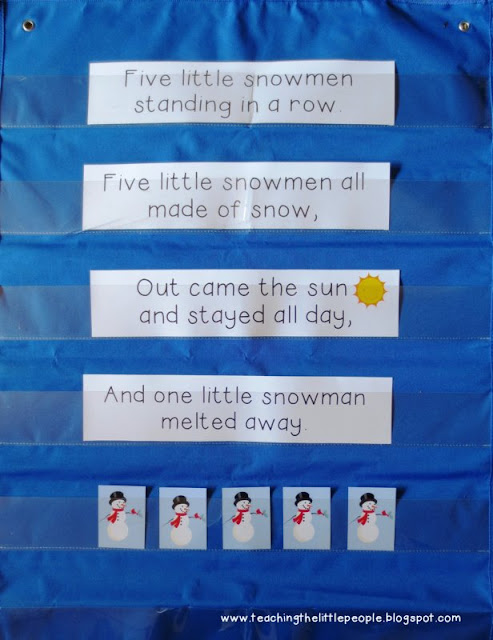 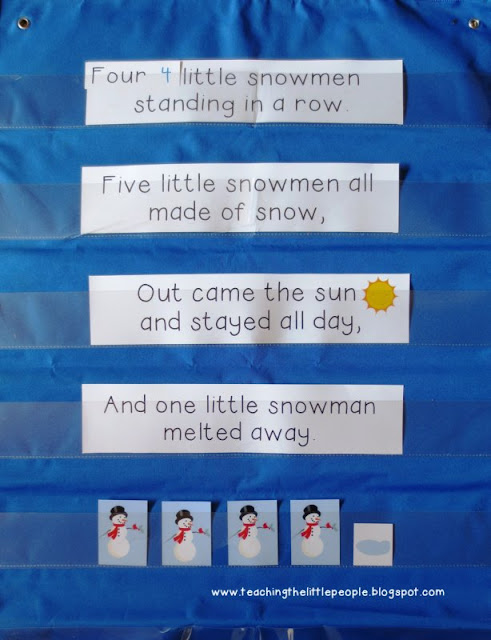 This printable poem can be found as this set: 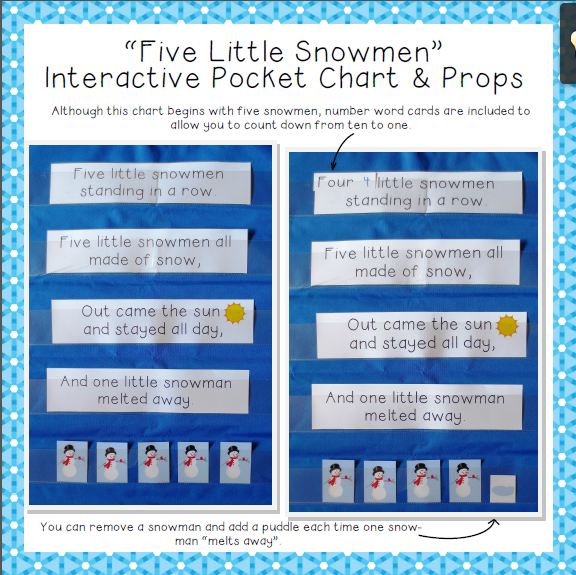 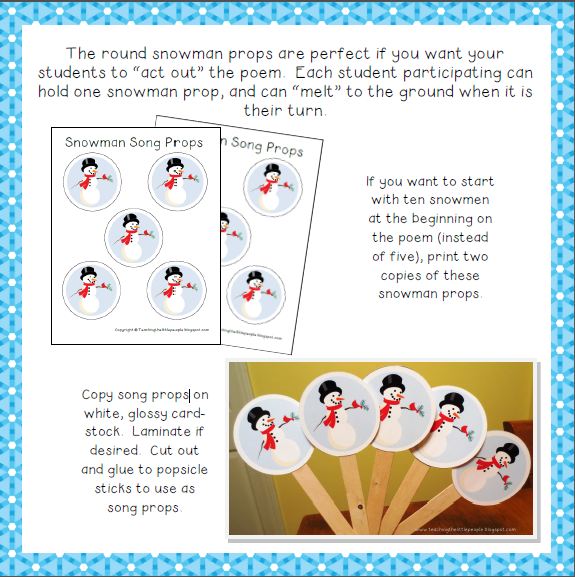 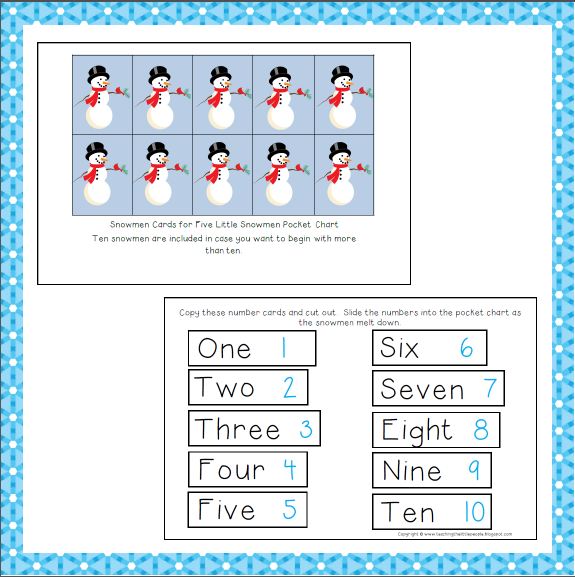 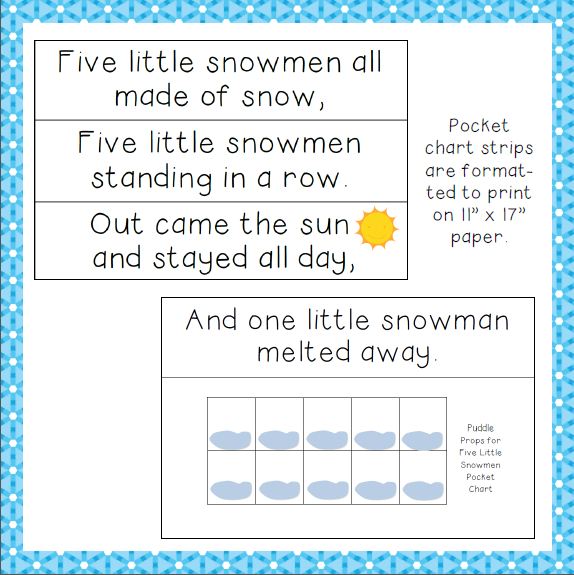 These sets are for sale in my Teachers Notebook and my Teachers Pay Teachers shop - and yes, right now they're on sale!
Posted by Julie at 8:00 AM 6 comments:

Julie
I am the mother of two teenage boys, the wife of a preacher, and a teacher of a classroom full of preschool-aged Little People. I am entirely almost right-brained, and find energy and joy in creating things. I was born in Texas, but have also lived in Prague, Czech Republic, and West Virginia. Now I live in California. I feel blessed to be at this place in my life where God has brought me.

On the Store Shelves

My Products for Sale

Our Classroom Tree in all Seasons

The Tree at the Beginning of the Year

The Tree in Spring

The Tree in Fall

The Tree in Apple Season